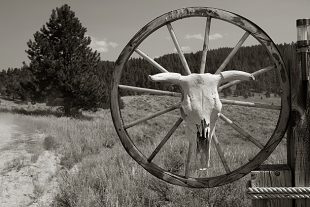 History in Idaho began when the White Man discovered it, and that’s that! Well, no, of course that’s not true. But unfortunately the recorded history of Idaho does begin with the appearance of Europeans in the early 19th century. Everything prior is based on fossil records and legends. So, the known story of Idaho is largely one of conflict between settlers and Native Americans, and of the struggle to populate and live off some of the continent’s wildest land.