Receive our updates via eMail

With a history stretching back to 1897, the Western Idaho Fair is one of the state’s biggest annual celebrations. Concerts, competitions, rides, games, crazy food and an overabundance of stinking, dusty farm animals occupy the large fairground for a week on the northern end of Boise. We couldn’t resist checking it out, and showed up on the fair’s final day.

We started at a horse show, which we hoped might involve trick riding or barrel racing. But it was more like the Westminster Dog Show for horses. Riders simply walked their steeds around in a circle while a panel of experts them on… something. Their gait? Musculature? I have no idea and apparently wouldn’t make a good horse judge, seeing as how my favorites finished dependably in last place.

The entertainment factor picked up considerably at the next event: the Mountain Boarding Big Air Show. Three extreme dudes put on a death-defying performance, hurtling down a steep ramp and leaping over a truck. We had missed the fair’s concerts earlier in the week, including Styx and Weird Al Yankovich, but this was a decent consolation prize. And I needed it! Because after realizing that we’d lost the opportunity to see Weird Al live, I was practically inconsolable.

We headed deeper into the fair, past stands selling Idaho Tater-Dogs (hot dogs shoved into potatoes) and wound up at a petting zoo. A wide variety of creatures were on-hand, from baby pigs to the giant Brazilian Zebu. I’m not much of an animal-toucher, but enjoy petting zoos because there’s nothing better than watching a toddler with a cup full of food pellets get too close to the goat cage. Curiosity, bravery, glee, terror, anger and disappointment, all in the span of about five seconds.

A giant exhibition hall in the middle of the fairgrounds held the arts and crafts competitions, with photographs, pumpkins and quilts joining ceramics and floral arrangements. And we made sure to tour the various animal halls, where I saw what must be the world’s largest rabbit, and tried to figure out the qualities that make for a blue-ribbon chicken. 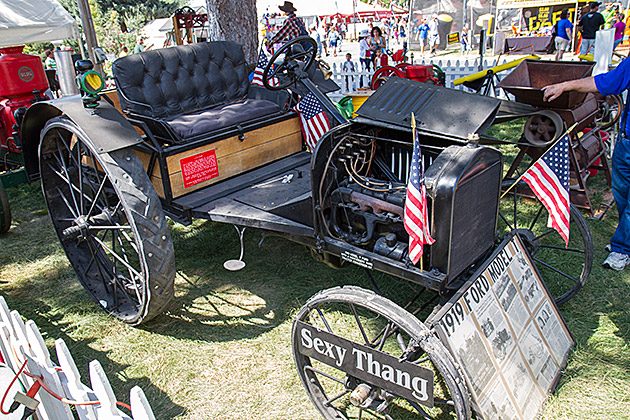